March for the USS Vigilant 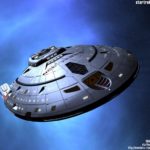 Investigating Zalkonian station Ea-435, the crew of the USS Vigilant found themselves with many mysteries to solve. While medical and science teams raced against time to develop a cure for the biotoxin that had infected Lieutenant Commander Eerie after an EV suit breach, the two Zalkonians who had been rescued from the station struggled to regain their erased memories. As Lieutenant (j.g.) Dueld taJoot worked with a combined engineering and intelligence team to piece together the events that led to the contamination of the station, more and more disturbing evidence of a Zalkonian plot to cripple Federation technology and personnel began to come to light. Worse, following the successful reintegration of one of the Zalkonians’ memories by Lieutenant Commander Greir Reinard, it became apparent that the very people who had been rescued from the station had been key players in developing the biotoxin in the first place.

The pressure intensified as the Vigilant’s away team, led by Lieutenant Commander Leo Handley-Page fell victim to a long-forgotten security measure that trapped them aboard the station. Right on cue, five Zalkonian cruisers arrived to strongarm Captain Diego Herrera into denying one of the rescuees’ request for political asylum. With no other option and facing insurmountable odds, the Vigilant returned the Zalkonians to their people before returning to Federation space to pass on the valuable intel that they had recovered.