After the surprise attack on DS 17, the senior staff of the USS TIGER-A began to assess the situation and find the identity of the attacker. Assembled on the Command Bridge of DS 17, Queen Eratis appeared with a message surrounded in mystery as survival of her Kingdom was at stake. Shortly after departing, a ship of unknown design and origin was detected not far from Eratis. Captain Riley ordered Commander West to take a search party and investigate. The crew assembled on the USS Triumphant as an emergency meeting was called to analysis the new information. When the away team returned, Commander West was not among them. Strange incidents among those returning suggested the presence of Changelings hiding among the crew.

While the Tiger crew were enjoying themselves at a New Year’s Eve party Deep Space 17 was rocked by an unexplained shock wave that caused chaos throughout the station by taking the reactors for main power offline and wrecking havoc with the gravity control systems.

Engineering crews worked on getting the station up and running and the rest of the crew began investigating a mysterious void in space near the Eratis star. A trio of runabouts was sent to conduct an up-close investigation of the void. During their approach, two of the runabouts were destroyed by an unknown craft.

LtCmdrs. West and Blair, and Ensign Sam Braddock were kidnapped and then replaced by Commonwealth spies. In addition, the Queen of the Erati appeared on the station requesting help against an unknown force threatening the region.

Science officers began working on ways to load science probes with micro warp cores to investigate the rift. And the crew is starting to expect something odd is going on with the trio of officer replacements.

The Commonwealth has launched ships through the rift in an effort to set up pods to pull power from the star and construct a transwarp gateway.

Meanwhile the spies have found out the USS Tiger-A is still in dry dock awaiting the Slipstream drive to be installed. The Commonwealth has decided to make stealing the slipstream drive a priority as it will make building gateways needless.

Currently, the USS TIGER-A has returned for its first shore leave in many months. Upon arrival at DS 17, the Tiger was completely emptied of personnel as massive repairs were needed after the previous mission. At the starbase, the crew gathered for the awards ceremony. Lieutenant Brayden Jorey received the Genesis Badge and the B-Plot award. Lieutenant Commander Blair received the Neelix Award and the Scotty Cross. The Sheathed Sword went to Lieutenant T’Mihr and the TOSMA went to Commander Ian West. First Officer Darius Clack received the Nebula Bar rounding out the awards event. Before the event concluded, an anomaly appeared that caused havoc on the starbase. The senior officers are investigating the matter as primary systems on the starbase have been affected.

November for the USS Tiger

The crew of the USS Tiger-A has been enjoying leave on the ship during their return journey to Deep Space 17. Crew members have been exploring the ship and getting to know each other during the long trip. A holodeck program about the Three Musketeers has been a crew favorite while the engineers have been hard at work trying to repair the ship.

The crew also gathered for a formal promotion and service ribbon ceremony on the Holodeck. Brayden Jorey was promoted to full Lieutenant and Ian West was restored to his rank of Lieutenant Commander. Lieutenant T’Mihn and Lieutenant Commander Alex Blair received commendations for the actions in helping the Tiger escape the ocean on the Iconian Gateway planet. Much to the crew’s surprise, duty posts were reassigned with crew members taking on new roles.

While Lieutenant Commander Wilde led an away team on an investigation of the nearby Iconian Gateway, the crew aboard the USS Tiger NCC 52199-A found themselves to be very busy. With the ship recently afloat from the bottom of the ocean, a mysterious computer virus began affecting various systems throughout the ship jeopardizing the ship’s stability. While the Engineering department began combating the virus, a rescue mission led by Lieutenant West set out to retrieve the away team.

After an incident involving the Gateway, the away team found themselves in an alternate reality that resembled a wasteland version of Earth. After some investigating, the away team began to realize that their reality was askew and began an attempt to escape. Meanwhile, the rescue team discovered the away team and wasted no time in beaming them aboard the shuttlecraft. Once the away team was safely aboard the Tiger, Fleet Captain Sidney Riley ordered the Gateway and its surrounding complex to be destroyed.

With the Gateway destroyed the crew of the USS Tiger NCC 52199-A set course for Deep Space 17 for refit and shore leave. While en route, a mysterious alien intruder was found in the Captain’s quarters, and the still unchecked computer virus continues to cause problems throughout the ship.

Meanwhile the remaining crew on the ship worked feverishly to raise the Tiger from its watery grave on the ocean floor. Repairs to the ship were slow going and the process was arduous. The chief engineer, Lieutenant Commander Alex Blair, somehow managed to keep the ship together as it was slowly raised to the surface. Once the ship was raised additional damage was found to the hull of the Tiger. The crew is currently effecting repairs so the ship can exit the atmosphere and return to space.

After a bad encounter with a mysterious entity that had the ability to grant wishes, the USS Tiger NCC 52199-A landed uncontrolled on the ocean floor of an uncharted planet. With the ship badly damaged and without power, and the crew suffering many casualties, the Senior Staff wasted no time getting to work. Under the guidance of Fleet Captain Sidney Riley, the crew was split into three teams; one team to work with Engineering to effect repairs and restore power, one team to set up triage centers to treat the injured, and the final team to perform search and rescue operations throughout the ship.

As the hours passed, the crew proved themselves to be resolute and progress began to show as the injured were found and treated and the ship’s systems and power grid were repaired and brought back online. While the Engineering team was in the process of restoring the structural integrity field, a strange old man dressed in robes appeared in Main Engineering. This strange old man introduced himself as the Guardian and said that the Tiger was trespassing on land controlled by the Iconians and that if they did not leave he would destroy the planet and everything on it. After a discussion with the Command Staff, this Guardian decided not to destroy the planet and revealed the presence of a nearby Iconian Gateway shortly before he vanished. With the news of a nearby Iconian Gateway, the crew found themselves posed to launch a full scale investigation. 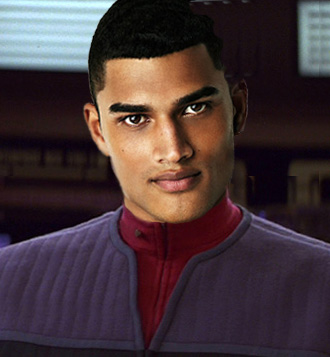 While en route to New France, the crew of the USS Tiger-A encountered an alien entity unlike anything known to them. Resembling a thick nebulous cloud, it covered the Tiger like a membrane injuring several crew member including Captain Riley in the process. Despite the queer circumstances, First Officer Darius Clack was ordered by the Captain to continue on its course toward New France without delay.

It became apparent, after the ship began changing course at will, that the emotions and feelings of the crew inspired by the alien were affecting the events on the ship. First contact with the unknown alien entity became the goal of the senior officers as the Tiger came into orbit around an O class planet estimated at 8 million years old. Before a full understanding of the alien could be established, the Tiger was hurled toward the planet where it struck one of its largest oceans and immediately sank to the bottom. Currently the crew are assessing the situation and damage as the USS Tiger-A has now been transformed into a submarine resembling the ones used in the atomic age on Earth long ago.

February for the USS Tiger-A

Having ended their last mission the crew of the USS Tiger-A headed back to Deep Space 17 for some well deserved shore leave.  The crew held a formal promotion and award ceremony in The Twilight’s Edge upon their arrival and also welcomed three special guests, Fleet Captain Idril Mar, Fleet Captain Toni Turner and Ambassador Tallis Rhul.  The crew celebrated well into the night as members received recognition for their efforts during past missions.

Several members of the crew found it hard to celebrate however, as they found themselves still struggling with the psychological aftermath of Bilire IV.  Lieutenant Commander Tracey Townson found herself in an even more unique situation as she has been assigned to take care of the Romulan child who was found on the planet.  She is currently working to find the child’s birth parents.

After the party crew members were free to explore Deep Space 17.  This included an exciting parkour race through the station set up by Lieutenant Commander Danny Wilde and Lieutenant T’Mihn Ah’my’ghan.