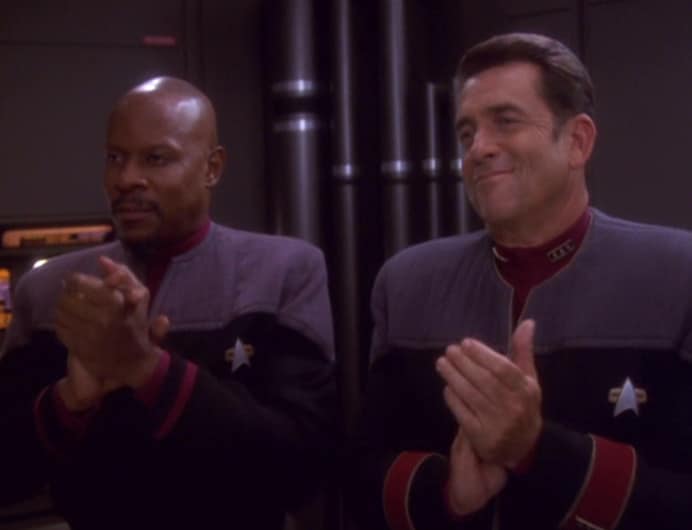 February 21, 2019by Roshanara Rahman in Promotions

The Executive Council is very happy to announce the promotions of several staff members:

Emma, the writer for Vice Admiral Reynolds, has been with the fleet for 12 years now and has been a steady hand, an incredibly capable simmer, and the consummate leader in her time with the fleet. Before her last promotion, Rear Admiral Renos described her as a tremendous force for good, stating, “As a writer, she has gained recognition through the top sims competition and the writing challenges. She is much loved by the crew she leads with a fair and even hand. She is dedicated, passionate about the fleet and generous with her time. She has worked in many roles including Captain’s Council Magistrate, Captain at Large, EC member, Cadet Steward and Deputy Commandant for the Academy to name a few and has excelled in them all.”

Today, she continues to lead the USS Gorkon as its captain and serves as the Academy Commandant. Her incredible service to the fleet shows the kind of dedication Emma has to making the fleet work.

Jess, the writer for Fleet Captain Rajel, is a stalwart member of the Starbase 118 staff, running her ship with tremendous care, dedication and an even hand. Under her leadership, the Constitution is approaching its fourth year of service — a fantastic achievement for any CO — and is well-regarded around the fleet as a stable, successful ship that’s a lot of fun to be aboard.

That’s not her only involvement in the fleet — who could overlook what she’s done leading the Image Collective? The work this team does is so integral to our fleet, and brings a huge amount of joy to our members when they see their characters realised in a picture. Not to mention all the contributions Jalana has personally made, from ship banners and logos to many of our awards and service ribbons. For all these reasons, a promotion to the rank of Fleet Captain is a well-deserved recognition of all the time, effort and devotion that she has poured into our fleet.

Jamie, the writer for Fleet Captain Taybrim, has been the CO of Starbase 118 Operations for closing on three years, and its First Officer prior to that. As a fixed installation, Ops sometimes requires a little thinking outside the box to keep missions fresh and interesting in the long term, and Jamie has proven more than up to the task, bringing excitement, flair and fun in equal measure to our namesake sim.

That’s not all she does. The fleet chats are a hugely popular event that run so well and so smoothly because of Jamie’s efforts in organising and moderating them. She’s a valuable voice on the EC, bringing her leadership experience in other RP mediums to any discussion, often providing a unique and useful point of view because of it. It was just last year that Sal was awarded the Staff Member of the Year. All of this speaks highly of Jamie, and clearly demonstrates someone who is well-deserving of a promotion to Fleet Captain.

Rich, the writer for Fleet Captain Rahman, has changed our group for the better many times over. From his early days simply improving the wiki with a host of new images and templates, to where he stands now as the outgoing Captain at Large, commanding officer of the Veritas, Deputy Commandant of the Academy, facilitator and founder of the Federation News Service team and spinoff website, and my own personal Jiminy Cricket, he’s shown us time and again how dedicated he is to the success of our community and to our members, who have a loyal advocate in this staff member. For all these reasons, Rich deserves the promotion to the rank of Fleet Captain as recognition for all his hard work, and to place him in an honored position in our fleet as one of our highest ranking members and leaders.

Head to our forums now to join us in congratulating these fine members of our fleet!

Roshanara Rahman is the commanding officer of the USS Veritas. Her writer is Rich, who joined UFOP: StarBase 118 in 2010. In addition to simming, he is the facilitator for the SB118 Dept. of Veterans Affairs and the Federation News Service's editor-in-chief.
View all posts by Roshanara Rahman