We’re here with another interview with a newer member of our community. The title of this column is “Lower Decks,” hearkening back to the Star Trek: The Next Generation episode titled “Lower Decks,” in which junior officers aboard the Enterprise-D speculate on the reasons for recent unusual actions taken by the command crew near the Cardassian border.

This month’s interview is with the writer behind Ensign Sera playing a female Vulcan Engineering officer assigned to Denali Station.

DeVeau: Tell us a little about the writer behind the character — where in the world do you hail from?  Anything you’d like to share!

Sera:  In the ‘real world,’ I grew up a military brat – bouncing all over the place from exotic locales such as, for example, Cleveland.  I’ve been all over the world, and like a cat have had a number of lives.  I worked as a graphic designer for 10 years and hated the grind of it – so I went back to school to become a Registered Nurse and just last year completed my master’s to be an Acute Care Nurse Practitioner.  I’m currently looking for work in that field, and it’s looking like yet ANOTHER move might be in my future as I pursue my destiny.

What was your introduction to Science Fiction in general and Star Trek specifically?

I started watching Star Trek TNG with my family as a young Sera.  I loved the story lines, the thought of a future where so many of our challenges (and self-destructive stupidity) had been overcome, and of course, the characters.  It was something that we continued as a family until the series finale, and then as I got older, it became my personal go-to favorite science fiction franchise.

I remember seeing Star Trek VI on opening night to a sold out show – the crowd was raucous…and when Spock said,  “If I were human, I believe my response would be… ‘go to hell.’ If I were human.”  The crowd erupted with cheering, laughing, and a standing ovation.  It was truly a magical experience.

What is your experience with roleplaying?

I started out with real time online simming in the late 90s with a now defunct sim group.  That segwayed into PBEM simming with the same group – which I found to be a lot more fun creatively, and I continued with that for a few years until the sim died out.  After that my then SO got involved in DnD/RPGs – and in an act of solidarity I joined the group just to see what it was like.  I continued with that for a few years but had to stop since the shift work with my career got in the way.  Then cue further adulting (boo hiss).  I had a child, went back to grad school and had absolutely no life for a few years…but after I finished my Master’s program I found I had a lot of free time on my hands.

Well, as I now had a lot of free time on my hand, and I enjoyed creative writing, I had a thought.  I wondered…are PBEMs still a thing?  So I went to my good friend, Google, and asked. (So smart, that Google.)  Well, SB 118 was at the top.  I went to the site and was really blown away at the thoroughness of it (wowza wiki!), and how active and vibrant it seemed…so I applied.

Why did you choose this specific character and duty post?

Well, you see, I just wanted to watch the world burn. I mean, I sat in the dark and considered, what could possibly be one of the most difficult species to play?  It also just so happened to coincide with my favorite trek species, so that’s where the choice of playing a Vulcan came from.  It was a deceptively easy choice to make, but like the initial ripples in a pond, Sera has become more than a seemingly emotionless, number crunching, insufferable space elf.  She’s kinda getting a little out of hand.  I mean, I really like the girl…but attempting humor?  Sarcasm?  Where does this madness stop?!

As far as the duty post?  Well, I enjoy putting things together and fixing things – and I may have a slight problem with looking up the scientific/mechanical basis in the science behind the fiction in Star Trek.  Also…Engineering?  It’s not something that I would consider in my wheelhouse.  Or maybe it is, as the human body is nothing but a biological machine – but easier – because hey, generally warp cores aren’t illogically irrational.  It remains to be seen if my initial opinion will bear out.

However, what a rabbit hole I’ve fallen into.  It’s turned a lot of my writing into a scavenger hunt to make sure tools are spoken of correctly, and that scientific fact aligns with whatever is being written about (when possible).  Of course, I’m not against the age-old tradition of making stuff up, either, but it really is enjoyable to put out a post that I think really delves into the complexities and intricacies of what these ‘miracle workers’ do on a daily basis to keep the big bird moving forward!

Where do you see your character five years from now?

Well, telling everyone of Sera’s intention to take over all of Federation space would be counter intuitive to her aspiration for galactic dominance, so I’ll just say continue to write and have fun.  I want to keep adding layers to the onion that is her life.  I’d like to see her grow in responsibility, continue to make new connections and strengthen the ones she’s already developed.  Maybe suffer some traumas, push the envelope, and get a cat.

Thanks for your time, Ensign Sera!

You can read more about Ensign Sera on the wiki. 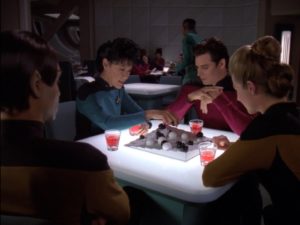