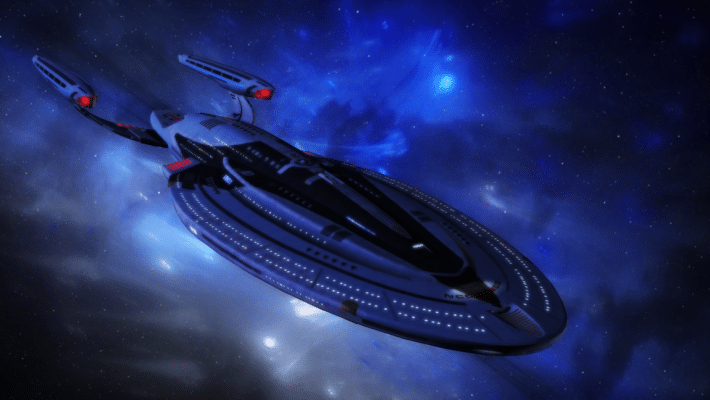 GAMMA QUADRANT — After an extended foray into the Gamma Quadrant, the USS Thor (NCC-82607) headed to brief the Vulcan Science Academy about a new species and its startling approach to immortality.

The Zet, now recorded, represent a radical departure from standard First Contact scenarios. They possess both antimatter reactors and advanced biotechnology but lack any viable subspace technologies due to the unusual high-energy nebular environment in which their system is situated. Unfortunately, the Thor’s crew had little opportunity to explore this technological disparity because of the highly stratified nature of Zet society.

“The Zet are unusual. We have witnessed their capacity for incredible feats of engineering, yet they do not understand the most basic concepts upon which we build the Federation. They have endless selflessness, such as Acting Shipmaster Nozku’, and yet they are capable of the most despicable deeds I have ever beheld throughout my career. Regardless of what happens after our visit, our view of the galaxy’s civilisations has changed after our encounter with the Zet.”

Unwilling to negotiate with anyone but the ship’s captain, local business owner and amateur demigod Pitorian Anroc threatened violent reprisals against the Thor’s crew if they did not meet his demands for new technology. During the negotiations, Fleet Captain Aron Kells gained a unique insight into this privileged class of Zet.

“Zet society seems to be very unbalanced,” said Kells. “Its wealth is highly concentrated in a few individuals who benefit exclusively from their position and the advanced biotechnology the Zet have developed. The inequity I witnessed first hand was very troubling.”

Unable to affect the return of the Penetrator’s crew and unwilling to abandon them to certain death by starvation, Kells offered a general asylum, which many survivors enthusiastically accepted. Among them, former senior executive Shaggee Rod’gurs spoke excitedly about the future.

“It’s tough to wrap my flond around it all, but if I had to put my feelings into a few words, I’d say ?!@ zoinks, scoob !@?” (Editor’s note: The FNS apologizes for this universal translator failure.)

Now in orbit around Vulcan, the Thor’s crew is embarking on shore leave while their new Zet friends adjust to life in the Federation.