What is a Writing Challenge “Champion”?

Some writers enjoy occasionally entering a story in the bi-monthly Writing Challenge contest. Others make a concerted effort to enter each and every round, and most are rewarded for their efforts — not only with recognition as a winner or a runner-up, but also in honing their skills and receiving feedback from Challenge judges. But it’s that select group of folks who not only enter Challenges regularly but also win regularly that I’d like to praise today.

The Writing Challenges have seen many multi-time winners (you can see a full list at the bottom of the “Challenge Winners” page), but simply winning multiple Challenges doesn’t make you a Writing Challenge Champion. Champions enter and win multiple Challenges in one year, demonstrating that they not only have the stamina and perseverance to think through individual topics and craft memorable stories, but that they also can do so again and again!

There have been five Champions in the history of the Writing Challenges: Saveron in 2011; Kali Nicholotti (now Cascadia Rainier), Velana, and Alleran Tan in 2012; and Saveron again along with Sinda Essen (previously Jhen Thelev) in 2013. These talented writers submitted winning entries in multiple Challenges in the years listed, making them Champions — and recognizing their excellent abilities!

Will you be our next Writing Challenge Champion? There’s only one way to start, and that’s by entering the Writing Challenge! Our current Challenge, “Fashion,” will be open until Monday, August 25th, so make sure you get in an entry before then!

The most congratulatory of congratulations is due to Sarah, the writer behind Saveron and the winner of our non-traditional holiday-themed Writing Challenge! The last Challenge of 2013 took its cue from Bonfire Night as it asked respondents to respond to the theme “Treason and Plot.” Sarah’s “Sins of the Mother,” which poses some very interesting questions about the Federation’s ideology, is told through the frame of a debate at Starfleet Academy. In its own words,

“You cannot believe that!” Bourke insisted, advancing on the podium. His face was red. “It’s people like you who would sabotage the peace that we live in. People like you who undermine all that we strive for, and damage countless lives in the process. Do you even hear what you’re saying, or did you learn to parrot it all on your mother’s knee?”

“They invade our allies and possible future Federation members on Duronis II.” Another step. “They attack the USS Drake at Gateway Station, and attempted to mine the USS Avandar.” Another step. “Finally, they occupy Thracian space, requiring the intervention of Starfleet to prevent the subjugation of millions of sentient beings.” She stopped walking. “Are these the actions of a people who seek peace?”

For the second Challenge in a row, a downloadable compilation of all the entries and judges’ comments is available, so be sure to take a look through and see what these talented writers had to offer!

Our first Challenge of 2014 is also open, with one month left to go, so be sure to check out this Challenge; it’s our first that asks you to write in response to a piece of artwork, and we look forward to seeing what you write! 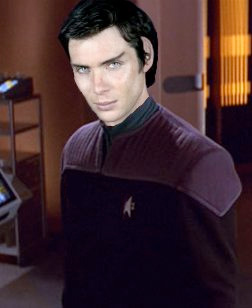 Saveron is the Chief Medical officer on the USS Garuda. He began his career aboard the USS Ronin under the command of Captain Toni Turner back in 2388. Between then and now, he has seen ships launch, introduced his son to the Laudean people, confronted the Borg and acted as chief medic and advisor to a selection of captains throughout the fleet.

When not in sickbay, he practices Vulcan martial arts, reads and plays music. He is strongly averse to the use of phasers. He is known for keeping a white pet tribble and has a holographic piano! The best advice for anyone visiting his quarters, though, is to wear an EV suit – he likes to keep them at Vulcan humidity, temperature and gravity, so it may not be a comfortable visit otherwise!

INTRODUCING A NEW FEATURE: Each month from here on out we will also be announcing the judges’ star pick – the bio that came close to winning the round but was just pipped to the line! This month, our star pick bio belongs to Fleet Captain Andrus Jaxx,  so congratulations to him!!

Lieutenant Commander Saveron’s Bio will be displayed on the wiki’s front page for the month of January. As always, you can find out more about the contest at its wiki page or in its forum. Round 3 is now open, so be sure to drop by and submit your own nominations!

Congratulations to Sarah, the writer behind Saveron, whose short story “My Brother’s Keeper” has won the January-March 2013 Writing Challenge! This round asked participants to build their stories according to the last decade of the twenty-fourth century. Where would their characters go in the next ten years? What would become of them at the dawn of the twenty-fifth century? Sarah’s story took an unorthodox look at the potential reunification of the Romulans and Vulcans, and the large panel of judges ranked it most highly of all the well-written entries. Congratulations, Sarah!

Our next Writing Challenge is already open, and Sarah has chosen the cryptic theme “Do Unto Others.” What does this mean? How will your characters explore the theme? However you choose to explore this theme, do it soon — this Challenge will end in one week, on Saturday, April 27th!