While their praises may not be sung quite so loudly as the winners, runners-up from the bimonthly Writing Challenges still deserve accolades for crafting fine pieces of fiction! One such story is “Orders and Consequences,” the May & June runner-up, written by the writer behind Lieutenant Kaitlyn Falcon. The story, which follows the ongoing saga of Captain Robert Falcon, was praised by judges for its provocative take on the Challenge’s theme. Wrote judge Toni Turner: “Mr. Falcon spun a tale reminiscent of Swiss Family Robinson, taking into account that command was more like a family decision.” By using the familiar character of Robert Falcon and his XO and wife Jiana, the writer was able to weave together his continuing story with the Challenge’s theme. Well done!

The next Challenge, “Fashion,” is already up, so be sure to hurry over to the Writing Challenge Forum for guidelines, deadlines, and inspiration!

As always, don’t forget that you can pick up a complete collection of all this round’s short stories, in PDF format, for free. Get yours here!

Lieutenant Kaitlyn Falcon is the Chief of Helm/Communications and Ops aboard the USS Darwin NCC 99312-A. She and her non-identica twin sister Rebecca were born on the USS Freedom at the end of the Dominion War. Kaitlyn has lived most of her life aboard starships.
She left the USS Nova to work for her brother on his freighter the SS Nova, giving her experience of life on Starfleet and Civilian spacecraft. She learned to fly a bulky freighter, patch up damaged systems and shoot pirates with a modified phaser. The experienced would later be described as allowing her to see parts of the Federation that weren’t on tour. 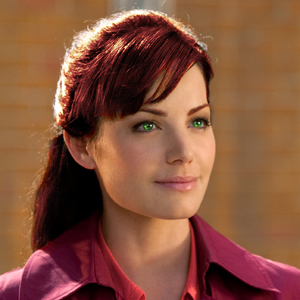 Eventually she left and joined Starfleet Academy and when she graduated was assigned to the USS Vigilant. From there she worked through the ranks and was transferred later in the year to the newly launched USS Darwin. Rhino, a beautiful ginger and white Syrian hamster is her pet companion.

Kaitlyn’s interest in piloting is such that she keeps a large number of holodeck simulations to keep her skills sharp and will fly any craft, air or space from as many different cultures as she can find. Other hobbies and talents include playing the piano and rock climbing, which was something her mother had enjoyed.

Congratulations to Lieutenant Falcon! Her bio will be displayed on the wiki’s front page for the month of June.

As always, you can find out more about the contest at its wiki page or in its forum. Round 8 is now open, so be sure to drop by and submit your nominations!