Witty Wordsmith: Devil in the Details

Witty Wordsmith: Devil in the Details

Narrative. Exposition. Telling.
These concepts get a bad rap in writing circles because all too often an overly long and boring narrative can put an audience to sleep. But we need narrative in fiction – whether that’s a simming post or a fiction novel – to communicate setting and character details to the reader. Narrative is the glue that binds the story together and prevents the reader from being confused.
One of the best ways to get great narrative in fiction and simming is through clever use of details. But, with great power comes great responsibility – details have the potential to turn a boring narrative into a great one but they can also turn to the dark side and drag a narrative down.
So how do you use details hone your narrative skills to create exposition that your fellow players want to read?  Here are a few tips to work with:
Start With Details.

Adding detail to a narrative makes it seem more realistic to the reader. General description in narrative is boring and easily forgotten, but adding little details (such as the plug of tobacco in the quote above) gives the reader something to focus on and visualize in their mind. When describing a scene or character, a few details can really make the narrative memorable. Consider the following two examples:

Doctor Brusher was a pretty woman in a medical coat. She was very nice.

Doctor Brusher’s brilliant red hair stood out against the teal of her medical coat. She turned and offered me a welcoming smile.

The first one is very bland. Doctor Brusher may as well be a mannequin in a labcoat rather than a doctor. In the second one the reader gets a few details to help them picture the doctor, such as the color of her hair and how it contrasts with her uniform. Adding some details to your narrative can really help it communicate, but we’re about to talk about one of the downfalls of details…

Don’t Add Too Many Details.
If details are good, then more details are better, right?  Unfortunately, no, they’re not. The reader needs just enough details to visualize your character or scene. Beyond that, they want to move on to the more exciting parts of the story like action or character interaction. This is doubly true in simming where your fellow readers want to see what you answered for tags and what tags you left!
The guideline for details is at least one but no more than three or four per description. Any more than this and the reader will be overloaded with information and stop concentrating on what is most important about the character or scene.
Consider the following examples:

Doctor Brusher stepped into the senior staff party looking radiant. She had found a dress in the starbase shops that draped about her shoulders like a mystical cape. It was set with rhinestones that glittered like stars, crested with her commbadge like the symbol of a Starfleet wizard. I couldn’t wait to dance with her later on.

Doctor Brusher stepped through the door wearing a dazzling black gown with a fitted bodice and split shoulders. Hugging her curves, the dress’s sheer layers crested her thighs and fell in lightly ruffled waves across her hips. It was cut low in the back, emphasizing the gentle curve of her spine. Just low enough to be provocative without being too revealing. Her brilliant red hair was set in soft roller curls as it cascaded down the flowing shoulders of the dress and mingled with the rhinestones that studded the gauzy fabric in swirling patterns like a nebula full of stars. She was wearing shimmering silver stockings and sharp black patent leather heels with silver buckles that made a sassy clicking sound as she walked. I looked deeply into her grass green eyes, ringed with smoky makeup and kissed with a bit of glitter, thinking about how magnificent it would be to dance with her.

The first example sets a few key details that craft a picture of a dress with fantasy elements. It leaves plenty of space open for the reader to fill in their own details. This is very important!  A reader’s own imagination is more powerful than a long narrative description. Give your reader just enough to imagine a picture for themselves. The second example leaves almost nothing to imagination, and may end up confusing a reader or leaving them with a disjointed image as they try to put all the narrative pieces together.
Watch Your Repetition.
Once you’re comfortable with adding details – but not too many details, one more pitfall to watch for is repetition. Repeating important details for emphasis is fine if done sparingly, but a reader will quickly feel exhausted if you keep using those details over and over again. The same applies for description in general. You don’t have to keep describing the same person or scene (whether that’s repeating details or adding new ones).
As long as you gave enough narrative for your readers to get a clear picture of the scene or character in their head they won’t suddenly forget what’s going on or what someone looks like!  Beyond that, repeating specific details can get very annoying for a reader. In the above examples, the writer only needs to mention Doctor Brusher’s red hair once. It’s a pretty memorable trait, and the reader will keep that in mind as they continue reading. If you keep mentioning Brusher’s long red hair, soft curly auburn locks, ginger curls and so on in the same post, the audience will think you have an unhealthy obsession with hair.
Play around with these tips in your next sims and see if you can find a balance that works well for you. Do you have any more tips and tricks?  You can come discuss them in the Writer’s Workshop Forum! 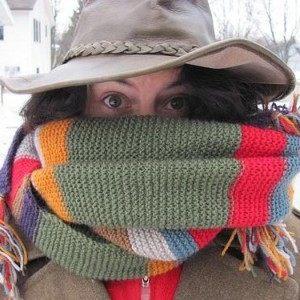 Gorkon resides in Utopia Planitia spacedock for upgrades and ceremonies