Those are the famous words uttered by Captain Picard in the Next Generation Episode “Yesterday’s Enterprise” (S3;Ep15). We are all aware of the Enterprises in Star Trek, however there were many ships named Enterprise in real life as well. With the US Naval Aircraft Carrier USS Enterprise (CVN-65) undergoing its final mission, I have decided to put together a chronological list of ships named “Enterprise”, both through history and into our future. In this multi segmented series, I will begin with the 18th Century with the very first Enterprise. The French vessel L’Enterprise.

This first Enterprise saw action between 1705 and 1707. and was quickly captured by the British Navy ship, the HMS Tryton in May of 1705. It served in the Mediterranean under the command of J. Paul. On May 19, 1707, W. Davenport took command and she saw action off of Leghorn, (Livorno) Italy. She wrecked on October 12, 1707 off of Thornton.

On April 19, 1709 a second Enterprise was built. This one was named Enterprize. It was completed and launched on April 28, 1709 and patrolled the Virginia under command of Nicholas Smith. In June 1711 the ship began an expedition to the St.Lawrence seaway under Rear Admiral Sir Hovenden Walker. In 1712 the ship returned home and patrolled home waters from to 1718 until it undertook a major repair and refit in that same year. In 1719 it was responsible for both the destruction of the depot formed at Donan Castle by the Spanish expedition to the coast of Scotland, and in October of the same year, the capture of Vigo by Vice Admiral Mighells. Between 1721 and 1724, it patrolled off of Virginia again.

Between 1730 and 1764 a British sloop named Enterprise was used in War of Austrian Succession and Seven Years War. It was broken up in 1764.

In 1738 the passenger vessel Enterprize relocated German and Swiss immigrants leaving for America via England, bound for the Philadelphia ports to live in Pennsylvania. There were 120 passengers aboard.

In 1743 an Eight Gunned British Sloop captured from the Spanish in 1743 went into service. This Enterprize spent her entire career in the Mediterranean as a despatch vessel and tender, being commissioned in 1743 under Lieutenant Thomas Herring. She was present at the Battle of Toulon in 1744, and was then paid off in 1745. She was recommissioned under Lieutenant William Cooper in August 1746, spending a further two years in service with the Navy until being put up for sale in at Port Mahon, Minorca in the summer of 1748.

In 1759, the French built another vessel named L’Enterprise. Information on that vessel is difficult to find, however and thus I cannot give more information. 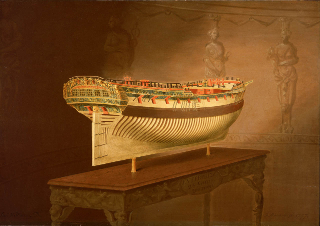 The above depiction is a painting of the hull model of the HMS Enterprise by Joseph Marshall in 1777. Some may recognize the image as closely resembling the Enterprise used in the holodeck by Picard and crew, in the Star Trek movie, Generations. In fact, it is the same.

This Enterprise was built at Deptford Royal Dockyard, England and launched in August 1774. It was commissioned in April 1775 under the command of Captain Sir Thomas Rich. It served throughout the American Revolutionary War as cruiser and convoy escort.

On 7 June 1780, Enterprise, under command of Captain Patrick Leslie, was at anchor in the Bay of Gibraltar with other ships of the Royal Navy. At about 1:30am, Enterprise saw some vessels drifting toward the harbor. When they came within hailing distance, the seaman on watch called a challenge. The six drifting vessels were set afire by their crews, who made their escape in small boats, leaving the flaming hulks drifting toward the British ships. Captain Leslie fired a three-gun salvo to warn the other ships, cut his anchor lines to let Enterprise drift away from the hulks, and then opened fire on the hulks in an attempt to sink them. With the Spanish fleet waiting just outside the harbor for any British ships trying to escape, the British seamen took to small boats and, at great peril to their lives, boarded the flaming hulks to attach lines to pull them away from their own ships and burn themselves out.

Enterprise was decommissioned in May 1784. From 1790 until she was broken up in August 1807, she was stationed in port in British home waters as a receiving ship, monitoring the arrival of foreign vessels.

In 1791, during the war scare known as the Spanish Armament, she was hulked as a receiving ship for impressed men at the Tower of London.

In April 1806, another Enterprise-class frigate, HMS Resource (built at Rotherhithe in 1777-78) was renamed Enterprise, and joined her sister ship at the Tower as another receiving ship to accommodate men taken up by another press at the end of the Peace of Amiens and the outbreak of the Napoleonic War.

The above image depicts the first US vessel named Enterprise, and the first USS Enterprise. It is pictured with galley Congress and other ships in the Battle of Valcour Island on Lake Champlain in New York in October 1776.

Originally a British sloop named George, built at St. Johns (now Saint-Jean-sur-Richelieu) in Quebec, Canada. It was captured in May 1775 by a small American force under Colonel Benedict Arnold who sailed up the Richelieu River on the recently captured Liberty. At 07:00 on 18 May, Arnold and 35 raiders captured the fort and shipyards at St. Johns, along with the newly-launched George, with no loss of life. Two hours later Arnold’s raiders left with the newly captured sloop, which was later armed with 12 guns and renamed Enterprise.
Enterprise was, at first, the most significant warship in the Lake Champlain squadron — which was charged with maintaining American control of the lake early in the war — and at times she acted as flagship for Colonel Arnold. Control of Lake Champlain and the adjoining Hudson River would have enabled the British to cut off vital supply routes between New England and the other colonies, and it would have allowed British troops to cross and attack Albany.

On 28 August 1775, Enterprise and other vessels embarked with more than 1,000 troops as part of an expedition against St. Johns, Montreal, and Quebec. Though St. Johns and Montreal were captured, and Quebec was besieged, the arrival of strong British reinforcements forced the Americans to withdraw from Canada in the spring of 1776. Enterprise and the other craft sailed to Isle aux Noix in the Richelieu River, where they waited while Arnold directed the building of a fleet at Fort Ticonderoga and Skenesboro (now Whitehall).
The battle was finally joined in the Battle of Valcour Island on 11 October 1776 at Valcour Island, near Plattsburg, New York, a site of Arnold’s choosing. Markedly inferior in firepower, much of Arnold’s fleet was sunk or damaged by nightfall. However, he managed to slip the remaining ships, including Enterprise, past the British fleet that night towards Fort Crown Point. A running battle took place over the next two days, and resulted in the loss of all but five of the American ships. Enterprise and four others escaped to Crown Point, then sailed on to Ticonderoga.

Although a tactical defeat, the battle was a strategic victory for the Americans, as they had disrupted the British invasion into New York such that it couldn’t be mounted before the onset of winter. It was nearly a year before the advance could be renewed, eventually resulting in a decisive American victory in the Battle of Saratoga.

During the British advance prior to the Battle of Saratoga, Enterprise was one of five vessels assigned to duty convoying bateaux in the evacuation of Ticonderoga. The small American force was no match for the British fleet on Lake Champlain, and after two ships had been captured, Enterprise and the other two were run aground on 7 July 1777, and burned to prevent their capture.

Yet another Enterprise was purchased on 20 December 1776 by the Continental Navy. However, little information on this ship survives. It operated in Chesapeake Bay, and was returned to Maryland Council of Safety February 1777.

Well, I think that’s enough for today. Next article will focus on ships named Enterprise from the 19th Century.